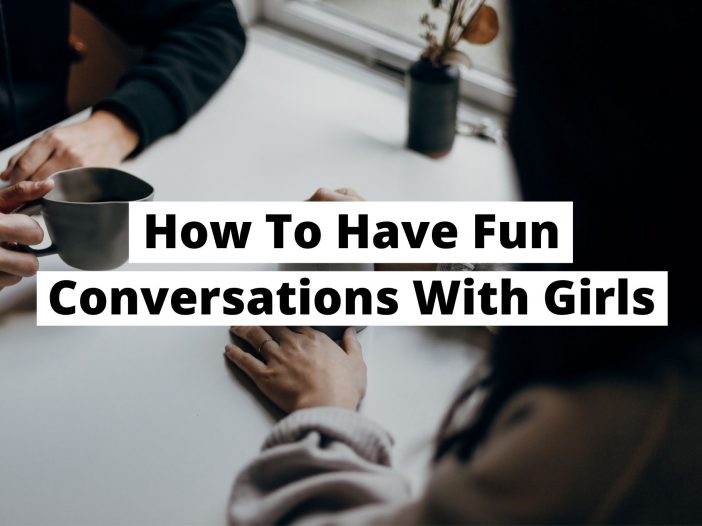 It’s no secret that most guys play it safe in conversations with girls they want to get into bed.

Unfortunately, being overly cautious with your topics of conversation guarantees two things: 1) the conversation will be boring and 2) you’ll run out of topics pretty damn quick.

Neither you or the girls you talk to want this. And it doesn’t have to be that way, conversations with girls can be fun, interesting, educative and plain hilarious… but it won’t happen automatically or with “the right girl”, it’s more about you than it is about them.

Let’s look into how you can do this.

Your responsibility as a man

Many guys hold the belief that “pretty girls can’t hold a conversation” and one of the reasons they cite is that since these girls have good looks, they never had to put in any effort into developing their personalities/inner self to become interesting, basically that everything was handed out to them so they became vapid and superficial over time (A.K.A boring).

Vapid, superficial and boring girls do exist, yes, but we’re not gonna use that excuse to avoid doing the work. Remember, this site is about finding ways to achieve what you want with girls, not about being bitter, black pilled and giving up. That’s for losers.

That being said, it is true that 99.999999% of girls are not gonna make the first move, open you or bring up topics to carry the conversation, which means a successful interaction is entirely up to you. Yes, you can find an exception, but in general you’re better off assuming that the responsibility of having a good or bad conversation with a girl falls on your shoulders.

This is to be expected. Most girls live boring lives and want to enter an exciting man’s life.

How to have fun conversations with girls

With that out of the way, now you know that any girl can be interesting, it’s just a matter of where you guide the conversation and a little bit the degree in which she follows you there.

What we’ll do is we’ll try out several topics until we find common ground (topics you’re both interested in) and then go deep into them in a way that seems graceful and amusing.

In order to do that:

To open a girl, it’s better to start with assumptions rather than questions.

If you ask her where she got her collar, you force her into giving you a straight answer like: “my grandma gave it to me” and then you’ll be like “ah, cool” and that’s the end of that conversation line.

But if you make an assumption, you leave more space for her to show you her personality. For example, you say “Nice collar. Let me guess, you made it yourself in DIY class?” she can go with:

As you can see, this gives her more options on how she wants to reply. The first reply tells me she’s fun and in a talkative mood. The second one that she sounds bitter or annoyed and the third one that she’s all up for flirting. You can’t get this kind of information with straight questions.

I’ve made it a habit to always give the other person conversation “material” to work with, that is, extra information they can use (optionally) to keep the conversation going. See the difference in these examples:

-How have you been? very well, and you?

-How have you been? very well, excited about finishing the classes of my master’s degree this week, and you?

As you can see, the first example forces the other person to come up with a topic entirely out of the blue, while in the second one you facilitate a topic they can use if they want: “Oh I didn’t knew you were studying a master’s degree, congrats! what did you study?” etc.

You can apply this same principle to your assumptions. The more “material” you give the girl to work with, the easier it is to find common ground since they’ll naturally ask/comment about what they are interested in and ignore what they don’t care about.

In my first assumption I gave the girl the option of talking about DIY stuff or directly answering it was a gift from her grandma, but just as easily I could have said “Nice collar. Let me guess, is it from Italian origin?” and give her the extra option of asking things like “Why from Italian origin??? have you been to Italy? are you Italian? do they sell these in Italy or what?”

Make it a habit to add this extra material and people will find it easier to have long conversations with you.

Left to their own devices, girls will bring up a boring topic and then blame you for the boring conversation.

It’s your responsibility to not let them go down this path, so what I always try to do is giving interesting plot twists.

-Her: I study accounting.

-Me: Alright, so in which semester do they teach you money laundering?

This is interesting because while it may make serious people frown, light hearted people know it’s just a joke. It takes you out of an ordinary, normie conversation and into fantasy world where she can come up with things like “Oh in 7th semester, on 8th is when we learn how to deal with different personalities, you know you can’t treat the same a meth dealer than a cocaine dealer”. She can display creativity because you showed her “it’s ok to be silly with me”.

Of course, not all girls will have tons of creativity and will just laugh, but you can always carry the conversation in that amusing, playful manner that borders on “risky”.

You run out of topics to talk about because you have too many filters on.

Well, when we don’t want to f*ck up, we put on filters that make our conversations “safer”. For example, you know that when you’re talking to a teacher you can’t say bad words, no matter what happens, bad words are forbidden inside your head, that’s one filter.

When talking with new girls, you usually put a lot of filters in what you talk about that you wouldn’t with, say your best friend. This is normal behavior, it “protects” us from f*cking up and saying things we shouldn’t say, but it also limits the topics we can come up with.

The issue is that we sometimes over estimate how delicate girls are and imagine that they will get offended with our darkest jokes. This is a mistake, we should not limit who we are just to not offend a girl.

This insight came when a friend of mine, by sheer luck ended up in a movie date with a girl that was waaay out of his league. Like, seriously, he was a 6 at best (and a chubby one for that matter) and she was an 8 from another country (exotic looks, exotic accent, all that).

In the movie, there was a character that was a pregnant girl wearing heels and she started running. My friend said “what a dumbass, her baby is gonna pop out” (In spanish it sounds way better: “Que pendeja, se le va a salir el bebé”) and suddenly he remembered that he was in a date with a girl out of his league and got very embarrassed, because that’s the kind of unfiltered comment he would only say to one of the boys. But the girl wasn’t offended, on the contrary, she burst into laughter and two years later (now his gf) she pinpointed that moment as the one she fell in love with him. Authenticity man, girls love it.

Of course, the price of being polarizing is that some girls will absolutely hate you or get offended by what you say. Doesn’t matter. It just means you’re weeding out bad matches quicker.

Remember: your job is to say things that will filter the ones who will love you and those who will hate you.

“Be who you are and say what you feel, because those who mind don’t matter and those who matter don’t mind.“