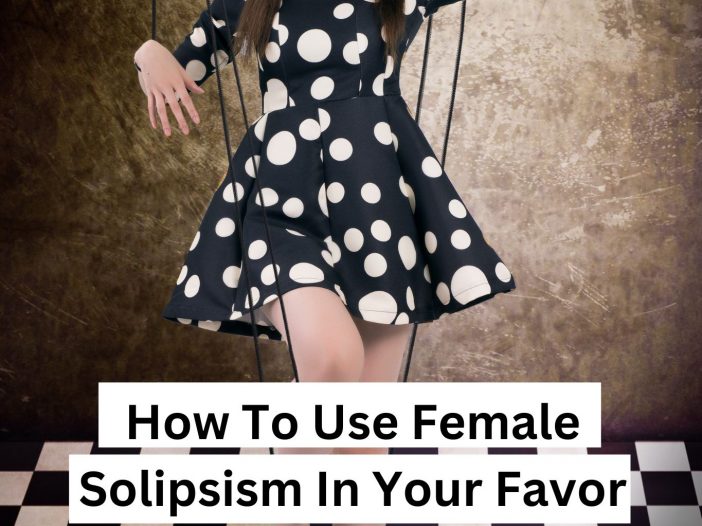 Are these traits objectively bad?

Maybe. Maybe not. Is a snake eating a mouse objectively bad? what about an eagle eating a snake? no matter how you personally feel about it, it’s how things work.

How to use female solipsism in your favor

Solipsism is “the view that the self is all that can be known to exist”. In red pill lingo it refers to women’s tendency to think that their experience is the universal experience.

Let me give you an example:

Do you see the projection? girls usually act like this. They fall for a guy who treats them like trash and they don’t leave because they feel their hypergamy optimized: He continually makes the gap in their perceived value larger by abusing her (lowering her self-worth) and enlarging himself (increasing his worth in her perspective).

Guys don’t act like this. Yes, everyone wants “the best deal they can get” but for us, a large gap in status is pretty much irrelevant. Most men have no issues dating a waitress, a cashier or a secretary as long as she’s hot, feminine and pleasant.

We go after real value, while women go after “perceived value”.

The thing is that girls think we work the same way they work:

This is solipsism. You can see it as a lack of self-awareness… on steroids.

When talking about normies there are two perspectives you can take:

-Ugh, most people are addicted to sugar. I gotta fix them (mid wit take)

-Most people are addicted to sugar. I gotta sell something sugary to them (130 IQ take)

So what if normies want to stay addicted to sugar? that’s not your problem to solve. But it’s undeniably a big tendency in our society.

It’s the same thing with girls: the mindset you need to have is not “is this good or bad?” but rather “how can I use this?”

In the case of solipsism, I can see several use cases:

For girls getting sex is easy, getting the man to stick around after that is the hard part. Of course, they can’t openly say this so they sugar coat it saying that the hard part is finding “love”.

Under that premise, it’s natural to want to test sexual chemistry before deciding “yes, this is true love”. Which for you means you don’t have to give commitment to have sex.

If you have friends who are career women, you can “use” them to create competition anxiety in a girl who you are actually attracted to.

I’m assuming you are not attracted to career women (too masculine, competitive and bitter for my taste) and area actually attacted to young, feminine girls.

Since girls think we also want high status girls and the latter is usually not very professionally successful (hence the retention of feminity), they’ll be jealous of the career woman while you’re actually not attracted to her in the first place.

When you make her feel angry, just act normal. Literally as if you had done nothing wrong. Their solipsism will make her think “wait, shouldn’t he be feeling embarrassed and sorry after seeing my angry reaction? why is he treating me like he did nothing wrong? why aren’t his feelings of regret taking over him? is it possible that he actually didn’t do anything wrong and I’m the crazy one? yeah, feelings don’t lie, they’re the one absolute truth. Ok, I’ll calm down because I don’t wanna be the crazy girlfriend”

DC Note: some girls are calling this gaslighting tho

Keep thinking of ways you can use her solipsism for your benefit and soon you’ll be reaping the rewards.