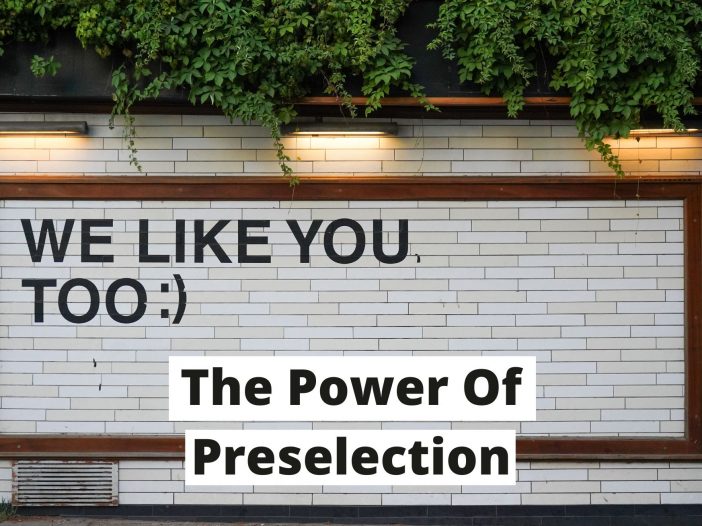 Girls are like credit cards. If you’ve got none, they couldn’t care less about you. As soon as you get one, they’ll keep chasing you until it gets annoying.

Vetting a person requires effort and risk-taking, so why go for an unvetted one when someone else already made that effort?

Girls are notorious for doing this with men. For them, a man who has a girlfriend is not a man who is off limits, it’s a man who has proven himself. Otherwise why would his girlfriend stick by his side? He must have something valuable going on.

The Power Of Preselection

Last week I went on vacation with my girlfriend to Tulum, México and got surprised by how much female attention I got.

I did had some things going on for me:

But still, I consider it was a lot of attention. And it got me thinking about why that was the case, which led to some interesting ideas.

We are constantly telling others who we are by the things we do. No actual communication is necessary for someone paying attention. If you sign up for a class on how to recover from bankruptcy, everyone will assume you’re bankrupt and they’ll refrain from asking you to lend them money. Why else would you take that class?

I know some people love to learn and be “prepared for the worst”, but the majority of people live on auto pilot, they only react to problems (they’re not proactive), so it’s more valuable to learn what will work on the majority even if there are some exceptions.

The point is that people will assume certain things from you based on behaviors you may not even be aware of.

In my case, I was communicating this:

This creates something interesting: a filter.

The only people who visit Tulum are either 1) college students with rich parents, 2) successful professionals or 3) really hot girls who get sponsored everything.

By simply being there, I was communicating “I can afford to be here”.

I had never had so many girls flirt with me or try to get my number/IG even thought my girlfriend was right there in front of them and I was embracing her with one arm. I didn’t entertained them but it was funny to read “look at the audacity of this bitch” in my girl’s face a few times.

I think she played a big role in this. My girl is very good looking (I consider her an 8), obviously I’m not gonna doxx her but to get a rough idea she’s built like this:

Just with black hair. Girls see a girl like this and start wondering about the guy she’s with. He must have something going on, all the guys here have money so why him and not any other one? why stick with him?

And the usual conclusion they come to revolves around genuine desire. “Yeah, so many guys here have money but they’re also pussies. If this girl is all smiles with him, it must mean that 1) he knows his way around her body, 2) is dominant, 3) has a big dick” whatever conclusion they come to it’s usually about being genuinely attracted to the guy.

Then the malicious thoughts take over. They figure that that’s what they want and additionally, if they can “steal her man” it means they are above her in the social ladder.

One of the weird factors I think helped is my age.

I’m 29 (I usually get told I look 2-3 years younger) which means I’m neither too young nor too old.

Guys with money who are 22 or so are incredible and have all my respect and heart-felt admiration, the bad part is that people in general assume that if you’ve got money at that age it must be because your parents gave it to you (pure cope and jealousy). At late 20s or early 30s that preconception suddenly lifts away and people assume you earned it.

Additionally, 29 is not too old in comparison to the average guy with money. In women’s mind, you’re just starting your career (nevermind that I started hustling at 6 y.o. haha) and if you’re just getting started and already earning enough to vacation in a luxury spot, it must mean you’ll have an even better lifestyle in the future.

As you can see, the mere act of being there communicated all of this.

Be aware of the messages you are sending with your behavior and try to classify them as attractive or as unattractive.