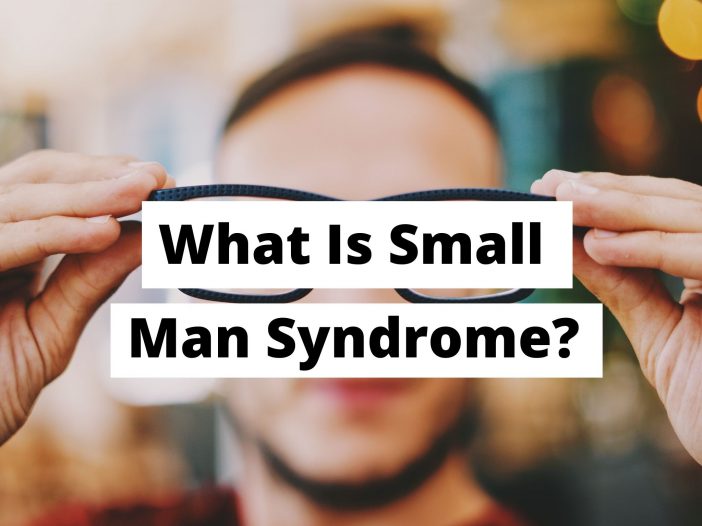 Also referred to as “Napoleon complex”, most people think Small Man Syndrome is just about insecurity surrounding men’s height, but I think the issue runs deeper and is more wide-spread than most people realize.

What Is Small Man Syndrome?

A man has small man syndrome when he feels inadequate as a man and feels the need to overcompensate by pursuing power and achievement.

The term traces back to Napoleon Bonaparte who, allegedly was quite short, which made him feel “inferior” in relation to other men who were taller. As a result, he felt a strong need for achievement as a way to compensate and feel like a “real man”.

This definition is widely accepted as true, but I think there’s more to it.

There’s a line in the last James Bond movie (“No time to die”) that had me thinking, where Bond says to the antagonist “You’re just another in a long line of angry little men“.

That part “angry little men” sounded curious, I couldn’t put my finger on why that part sounded so weird until I started seeing it: most villains in series or movies are shown to plan their lives, their ascension to power and most importantly, their revenge. Meanwhile, life simply happens to chads.

An example in fiction

One movie that exemplifies this perfectly is “The Incredibles”.

25 year-old Mr. Incredible is seen as a relaxed chad with big muscles who doesn’t worry a lot about the future, he’s shown with an attitude of “whatever comes my way, I’ll figure out how to deal with it when the time comes”.

Of course, this attitude combined with a bit of bad luck is what leads him to live a life of quiet desperation later as a 40 year-old head of household earning minimum wage, but as frustrating as that situation may be, he doesn’t have any major regrets or grudges. Life simply happened to him: he did what he thought was right, a pretty girl came along, then a family and so on, he kept going, putting one foot in front of the other.

In contrast, Syndrome (the antagonist) held his grudge during the whole time. He then makes an elaborate scheme to get his revenge on Mr. Incredible (giving a long speech of his motives in the process) and when he fails to do so, he goes after his family.

This is what I mean by “angry little man”, I’m arguing that the small man syndrome is not about actual height insecurity but rather about resentment over feeling uncomfortable with masculinity.

These type of men suffer as kids or teenagers, possibly due to bullying or parental abuse and start seeing masculinity as problematic or harmful, understandably wanting to have nothing to do with it, and wanting payback once they grow up. This is usually in the sense of “revenge of the nerds”, meaning living the dream while having fantasies that the people who harmed you will end up earning minimum wage and living lives of quiet desperation.

This tendencies are utterly disgusting to girls because at some level they understand they’re not dealing with an alpha, but rather with a guy who is not comfortable in his own skin and deep down is a scared little child wanting to hurt others so they can’t hurt him.

If any of this sounds familiar or relatable, it is incredibly important that you learn how to feel comfortable with masculinity and make peace with your past. If you don’t, your misplaced anger and aggressiveness WILL surface at the worst possible moments and you’ll end up driving everyone who loves you away. Maybe not the first time, or the second time, but on the long run no one will want to associate with a guy that behaves like that. Not girls, not business partners, not even family.

This week I won’t recommend you a book, but rather “The Last Dance”, a Netflix documentary about Michael Jordan and the Chicago Bulls. In the very first episode they mention the small man syndrome (in Jerry Krause, the general manager of the Chicago Bulls) and how much damage it did to the team.