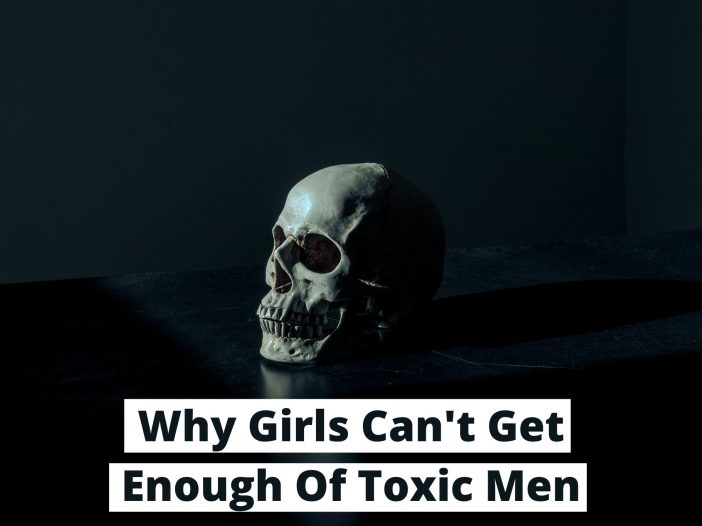 This is a question that puzzled me for a long time… why do girls choose to date bad men when they’ve clearly got better options?

Like, if hypergamy is a thing it means they’ll choose the guy who looks hotter, has more money and highest status. Then why tf do they stick by some common burglar’s side serving jail time when a fit, young banker is asking them out?

The former is broke, has a tainted record (no possibility of new jobs) and has shown no morality. The latter is gonna live in the upper-middle class forever at minimum, it’s objectively the better choice.

While I’ve considered girls may just be dumb, I’ve been thinking about this for a while and I think I’ve reached a conclusion.

Why girls can’t get enough of toxic men?

As a man it’s easy to spot a guy who is damaged goods.

You know that only the lowest of the low can get themselves to do immoral things like robbing a bank. There are thousands and thousands of dads in a desperate financial situation who prefer digging an even deeper hole of debt than reducing themselves to that level.

Only the lowest of the lowest can get themselves to slap their wife in the face over some argument. Or cheat on them, or go after girls who are taken. You get the idea. You see a guy do these things and you immediately know how f*cked up his mind has to be in order for him to even consider them.

They have never been men, so they quite literally have no idea what it’s like to be a man. They think men can simply yell at some bully and then he’ll be like “oh right, I’m sorry, I’ll be more mindful of others next time”. For any girl reading this: no, that’s not what will happen. If by some magic you become a man for one day and try to pull this shit, you’ll end up with a broken nose (at minimum) and publicly humiliated daily until you beat up the bully with your own hands and *force* him to stop.

What I’m trying to say is that girls think they can live in a world of no consequences.

You can see this in the tons of youtube videos of women trying to get selfies with dangerous animals like lions or bears and then trying to sue the zoo when the animal understandably harms them.

2) They live for emotional spikes

Girls see a guy working a 9-5 and think “that’s so normal… AKA so boooring”. Then see a guy robbing a bank and think “this guy actually dared to cross the line… that’s something no guy I’ve met has ever done before… that’s so interesting”.

Note: This is definitely 1) entitled and 2) a loser mindset. Entitled because earning money is not a given, it’s something people work hard to get and disrespecting money WILL humble you pretty quick. A loser mindset because with all the opportunities the digital era is giving us you can’t possibly think stealing is the only viable way to get out of the hole, come on.

if you haven’t seen it, I recommend the Netflix series “Clark” to see a practical example of this around ep. 3. Most girls really don’t care about wealth building, sacrifice, discipline and all of that. The big majority just wants to live the moment as intensely as possible, and in that episode Clark (the protagonist) robs a bank and picks up a girl there, then proceeds to dazzle her with reckless spending and bad behavior, like pulling a guy out of the restroom by force out of impatience, hitting it raw with a stranger, breaking into a building just to use its pool.

This of course crosses the line and has its consequences, but these guys are 100% committed to “enjoying today at the expense of tomorrow” and girls are easily dazzled by it because 1) they are addicted to emotional spikes and 2) from a certain point of view it’s also an exhibit of power “I want, so I take… and who is gonna stop me?”.

“I can change him!” has been said by girls since the dawn of time and none have been successful.

Once sexual attraction has been established (it is well known that toxic/dark triad guys are naturally charming) girls will try to get him to commit, which is impossible due to their nature. Girls will try anyway and end up in tears, of course.

This is notably different from the majority of guys: simps who try to lock down any attractive girl who doesn’t reject them immediately.

This makes girls come to the conclusion that simps are below her since they have no options other than her and that the toxic guy is above them since he has tons of options (preselected).

They look up to him… since he’ll never look up to them due to narcissism.

While you may not like what you just read, it’s an undeniable fact that this excites women. Fortunately, principles matter more than concrete actions:

The Exception: Some girls are simply damaged goods too

Some girls *like* being mistreated. As ForthWorthPlayboy notes here, some girls are beyond redemption and need you to treat them badly in order to feel attracted to you.

I also recommend avoiding them.